What happened to all of the Real Audio files?
Real Audio has always been at the low-end of resolution. With the overwhelming acceptance of MP3, it was decided that we would provide you with the best quality that was available. So why did we torch the RA's? The sound quality is so poor that to obtain RA's greatest resolution, the resulting file was nearly the size of an MP3 - yet the quality was marginal at best.

Who does your artwork?
The first CD was put together by Gary at the end of January, 1999. Shortly after that we received an email from Carlos Arcuri who, in his spare time, put together a very nice CD cover (below). Unfortunately, we could not secure the license to use the background matte, so the cover never saw commercial release. However, we liked what Carlos had done so much that we asked him to work on our next CD cover. 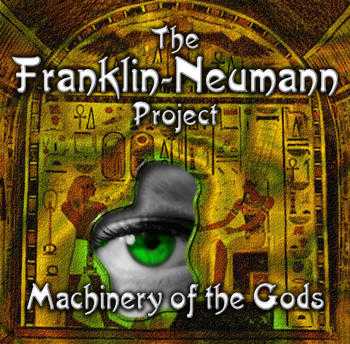 I really like your Neo-classical songs, are you going to do more?
Most people, much to our surprise, really like Mendelssohn's Electric Guitar Concerto. We had never purposefully set out to do a song like this, but we thought that we needed a lead-in for Forever In Your Eyes (a song that didn't really seem to fit the mood of the album at the time). Gary came across the Mendelssohn piece and decided to noodle around with it for a while. At the time, he thought it was far too long to give any serious consideration so he recorded a very short (1 minute) piece of it, played it in front of FIYE, and felt that it lead into the song very nicely. In hind-sight, he figures he probably should have recorded the entire song and will make an effort to keep this genre of songs at an appropriate length.

What is your musical background?
For the most part, Bill and Gary are self-taught. Gary originally wanted to pursue a degree in music but after seven (or so) classes of music theory and music history, he changed his mind. You can only go so far knowing when Bach was born... Oh, and the college credits weren't transferrable - but he isn't bitter. ;-) Both Bill and Gary played in garage bands in high school with Gary graduating to bar bands in college.

Do you prefer analog or digital?
It's amazing how many people have asked that question - and never received a straight answer. The FNP now uses digital recording technology exclusively for all of their songs. But the only reason for that is ease of use and compatibility. It's alot easier to exchange ZIP disks when each member finishes a portion of a song than it is to drag the multitrack tape recorder from house to house to lay down tracks. While recording music digitally, they find that the songs seem to sound a bit "hollow." But by the time a song is finished and ready to be added to the album, the instruments have been mixed to such an extent that the "hollow" quality is no longer discernable. Does that answer your question? ;-)

How do you write your music?
Typically, Bill comes up with a "hook" for a song. This may be a riff that spans a few bars or an entire four minutes worth of material. He then passes this off to Gary who attempts to write lyrics that are representative of the mood in the song followed by any additional rhythm parts. Once this is done, the song is passed back and forth for each member to add parts (lead guitar, bass guitar, different lyrics, etc). When the first draft is finished, the song is put here on the website and the song is "forgotten" for a while. Bill and Gary then go back to the song after a couple of months and make changes again, enhance the mix, or whatever is needed in order to get the song ready for the CD.

Are there only two guys in the band? or
Will there always only be two guys in the band? or
When will you be playing in (insert city here)?
At the moment, there is just Bill and Gary. However, they are always looking for and hope to pull in some other musicians to appear on future CDs.  Because there are only two people in the band, it becomes logistically and financially impossible for them to play out. Although they have toyed with the idea of working their music into a performance and playing out, they would both be fired from their jobs (that's okay), divorced from their wives (hmmmm... get back to you on that one), and become destitute (in Hawaii that would be okay, but in the Midwest that would bite).

Why are all of your songs available for free download?
Although they understand the marketing principle of giving customers a "taste" to get them to buy, the Franklin-Neumann Project wants listeners - not marketing variables. Artists never know which song is going to take off and be a hit any better than they know which song is going to bomb. This way, the FNP doesn't have to decide for you which song they think you should like. You can listen to all of them, decide which ones you like, and then decide whether you want (and are able) to support their endeavor. This will remain their policy forever, or until their ISP tells them that they've run out of server space. ;-)

How should we listen to your CD? (because it sounds muddy, hollow, or like an AM radio)
Occasionally, this question pops up (typically with the first release copy of the Machinery of the Gods which is no longer in distribution). Prior to the FNP CD being mixed and recorded, the system is optimized using a commercially available CD having a similar "mood" or "ambiance" - in this case, Awake by Dream Theater was used. As such, your stereo system should be optimized for your ears based on a commercial CD that you have prior to listening to FNP CDs. Only then will you get the full effect of stereo, sound effects, the mix, and sub-sampling.